My name is Sabrina – I'm trans 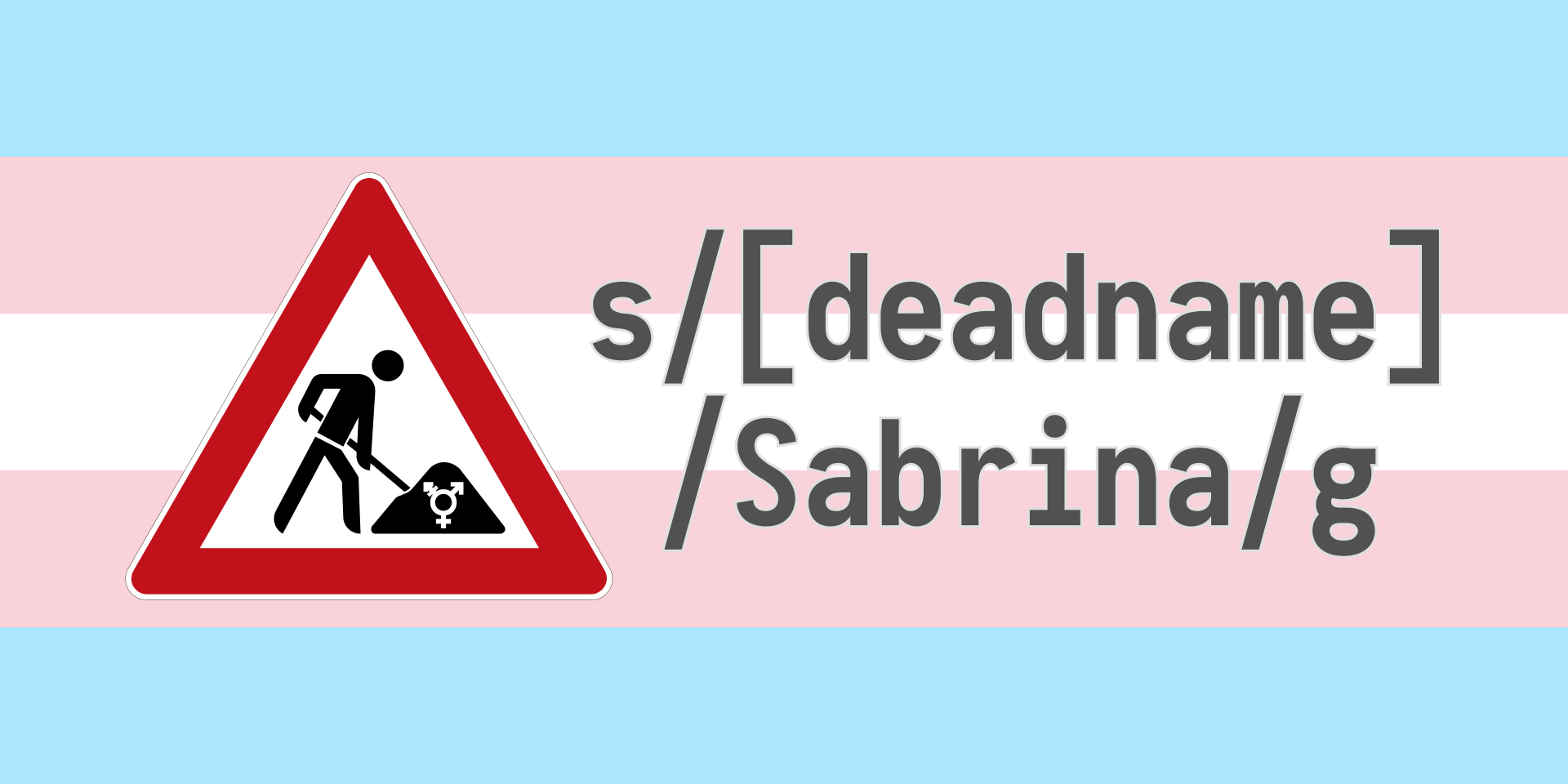 The Distant Past (or: “have you always known?”)

Until not too many years ago, I had hardly heard of trans people. Perhaps lumping in them in with drag performers or even gay people, they were the stuff of hearsay, odd creatures – but as I came to learn more about them, I was increasingly confused. What did they mean, they “felt like a different gender”? How does one feel like a gender? I never “felt like” a man, that's for sure... I kept coming back to that question many times over the past few years, with increasing intensity.

I know that I certainly never felt like living life as a guy was wrong per se, or even something that I needed to change; it was just something I felt I had to live with—and over the years developed a kind of fatalistic apathy towards.[3] I had read enough transphobic screeds over the years to be convinced that the very idea of transitioning was folly: a despicable desire, doomed to end in failure.

But last winter, serendipity struck and a random tweet sent me to watch Contrapoints' excellent “Autogynephilia” video, which debunks a lot of the common misconceptions and describes the author's own feelings towards her transition.[4] And so I finally dared to ask myself: what if there was a good reason that I kept coming back to these questions? Maybe this was not such a deplorable idea after all... [5]

Over the spring I was able to be part of an amazing support and discussion group within JHU. It wasn't a very straightforward process, and oftentimes I walked out more confused and unsure than I walked in – so if lots of things don't make sense to you right now, yeah, it's tricky stuff – but on some days, I did learn and realize things about life, gender, and myself.

It was in May that I decided there was only one way to proceed: I'd have to give transitioning a shot. I didn't “feel like a woman” yet (and I think I'm still not there) – but I knew that I genuinely wanted to and had for a long time. I had to find out whether a better life was possible.

In June I started Hormone Replacement Therapy.[6] I was told that this process – suppressing the male body's production of Testosterone and instead injecting Estrogen at regular intervals – made people feel quite different even only after a few weeks, and thus long before irreversible physical changes set in, so I figured there'd be little harm in trying. The results were surprisingly, and, honestly, disappointingly unnoticeable. I didn't feel different per se, or at least not in a way that I could say was thanks to the hormones – but I did feel a great relief to be moving forward in a direction I felt was good and so I decided to continue the treatment and see where it led me...

Looking back, the change really was subtle: I didn't wake up one morning and feel different, but month by month I felt... more alive and more grounded... more like a real person that seeks to lead a real life, free from the cynical dullness that had its hold over me. The other side of that coin is that, as many close friends told me, I am a bit of an annoying teenager in the middle of puberty a over again... but this time around, I'm excited for what's to come.[7]

Of course, in just about all regards, I am still far from where I want to be, but I know that while my mental health sure has suffered a great deal, things are really getting better. I have never felt so positively about my body, never have I felt such a need to care for and cultivate it. My body is a temple and I refuse to let it slowly decay. It is really construction work time.

First of all: don't ever ask trans people about their genitals—unless you're the kind of person that also asks cis folks about the state of their genitals, in which case, uh, go off, I guess. That said, since I believe that there is much confusion among cis and even trans people about what medical procedures exactly people undergo, I will try to outline what exactly can happen in a male-to-female transition – or at least what I hope to achieve in mine.

It helps to clearly conceptualize the many meanings or really sub-components that a transition might entail. In my mind, these are the five important things to consider, ordered from most to least important to me:[8]

In that list it becomes clear that “The Surgery” is only a small part of transitioning – and for me personally one that is rather minor. It's also important (and surprising enough!) that all these surgeries are not at all monoliths: there is a variety of genital surgeries that people choose from and when it comes to facial plastic surgery, there isn't even a “baseline” option that one may guess most people go for. Shave off part of your Adam's apple? Scrape off bone to reduce your jawline? Break your skull to readjust the angle of your forehead? Cut off your scalp to realign it lower on your head to mask a receding hairline? All things are possible for those with enough cash...

So how and when will I tackle all these? Well, with this post, I can finally get started on socially transitioning.[9] HRT then is well on its way, but it will take a few years for effects to fully come to fruition – and I will wait with surgeries of any kind until that's done.

The biggest hurdle I am facing right now is voice training. Realistically, that too will take years to really work well, and until then I'm stuck having to polish a voice that at first will sound odd and thoroughly “fake” – but there is no other way for transfeminine people. Male puberty permanently and irrevocably changes your vocal chords and so we, not unlike professional singers, need to learn to control muscles and shift moving parts in our vocal tracts that most people have no idea even exist – at first consciously and through exercises, then juggling it with speech, and finally, one day, effortlessly throughout everyday life.[10]

The Present (or: “ok, what does this mean for me now”)

Call me Sabrina and use she/her for pronouns. If you mess up, don't sweat it, I often do, too. Correct it and move on – at this point it is not that every mistake hurts terribly, but rather that every little time someone gets it right, that someone is making my day, so I believe in you!

When it comes to language, there is of course a lot more nitpicking one can do! If you wanna go the extra mile, think about other gendered language you use. “You guys,” while extremely popular, might not always come off as gender-neutral as you want it to, especially if said between people that don't know each other well. “Dude” and “man” are similarly problematic – and, I'm not gonna lie, similarly hard to unlearn, especially if you liked them as much as I do! This category of gendered language took me a long time to reduce in my own usage and I still suck at it, so, again, don't be too worried. It's really just one of the many ways to make the world a better place.

The best thing you can do, of course, is to start asking yourself some of these questions, too: what does gender mean? What does it mean to me? What determines gender? (It ain't chromosomes or genitals for sure, because I guarantee you, you've seen trans and intersex people that would destroy any of these notions – and if you haven't, turn on the news!) Should we try to contain gender in a binary? Abolish it? And: should I really make that name field in the software I'm writing immutable?

Finally, and most importantly, however, please come and talk to me if you have any questions! I can't promise that I'll have a good answer (and in fact, most likely my answer will be something along the lines of “it's complicated” and “yeah I don't get it either”), but I will try. I have learned and thought about this stuff a lot; I still remember how clueless and confused I was as little as a few years ago,[11] and I'm learning more still every day.

Thanks to all those who supported me this far: family, friends, and colleagues! Sorry for making a bunch of you proofread this post beforehand :)